Clark County is home to over 110,000 dogs, of all shapes and sizes. Their poop adds up to more than 18 tons every day! Pet waste left on the ground mixing with stormwater can be washed into storm drains that lead directly to our streams and lakes. This waste carries harmful bacteria which can affect the health of aquatic wildlife, ourselves and our children.

Join thousands of Clark County neighbors and show your commitment to protecting the streams and lakes we love by pledging to:

Signs can be a simple and effective way to address pet waste issues in your neighborhood and community spaces.

Check out the free signs available to Clark County residents to help remind people to scoop it, bag it and trash it! Everywhere.

Need a post to share on social media or an eye-catching graphic for your neighborhood message board?

We've got you covered! Check out the graphics below to help spread the word that picking up after our dogs is the right thing to do.

Talking with neighbors about pet waste issues isn't always easy, but we have tips and resources that can help.

Learn about success stories and strategies that have helped others and get support for addressing these issues.

If you're here, you probably share our goal of reducing pet waste left on trails, parks and neighborhoods. Sometimes, a simple gadget can help.

We offer gadgets and tools to help people make sure they scoop it, bag it and trash it. Everywhere.

Yes, it's gross to step in, disrespectful to others using the park, and carries diseases. It's also a primary source of bacteria pollution in our streams.

Water pollution isn't the first thing people think about when they see pet waste on the sidewalk, but Clark County scientists have indicated dog poop is a primary source in local streams that do not meet state water quality standards for E. coli bacteria.

Have a pet waste problem in your neighborhood? These signs can be very effective! We offer two types of signs, free of charge, dependent on availability. Signs are made from Corex material.

To request signs contact eric.lambert@clark.wa.gov and include the number of signs requested, name and address. 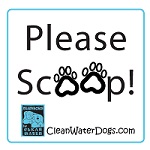 'Dog owners! Please pick up after your pets.' signs 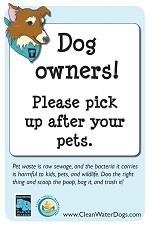 Help spread the word on social media or in your community newsletter with these sharable graphics. Each graphic includes a link to a .jpg (1080x1080 px) for digital sharing and a .pdf (18"x18") for printing. 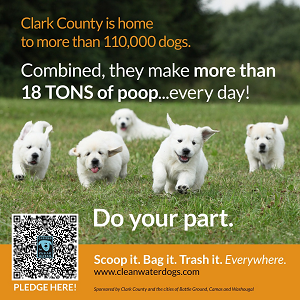 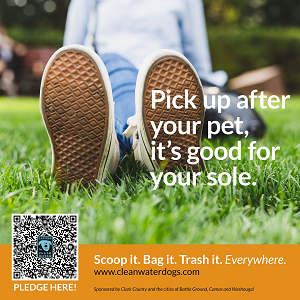 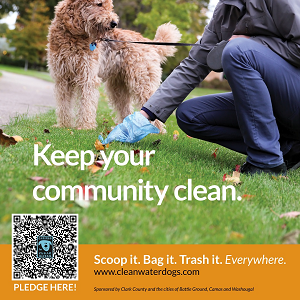 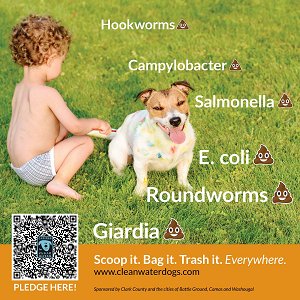 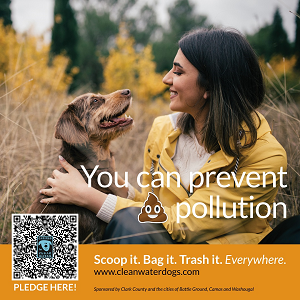 Clark County Clean Water Division staff can discuss with you the best way to confront the problem in your area, whether it be putting signs in problem spots, instituting a weekly "Pick-up Day" for your neighborhood, or setting up a public bag dispenser on the corner. We'll give you tips to connect with others in your neighborhood who are motivated to reduce pet waste pollution.

Is pet waste a problem in your neighborhood? Resources and tips for helping neighbors pick up pet waste. 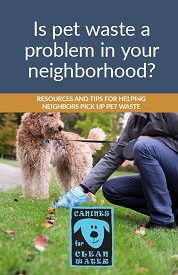 We have things that help make "Scoop it. Bag it. Trash it. Everywhere." a little easier. So take the pledge and let us know how we can help. Items are available to Clark County residents on a limited basis upon request and dependent on supply. To request items, email eric.lambert@clark.wa.gov and include your name, address and what you'd like. 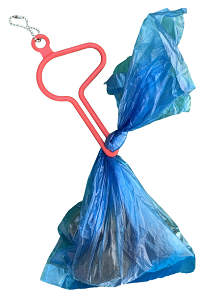 You scooped it, you bagged it, now make sure that bag gets all the way back to the trash, not left on the side of the trail. 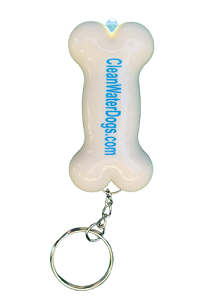 On those days when you wake up and come home in the dark, this mini light can help you find the pile before someone steps in it 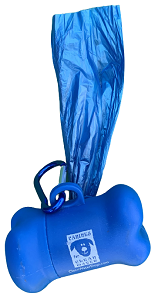 Bag dispenser with roll of bags

Clip this to your leash so you never forget bags again. With a roll of bags, you can help out a neighbor who may have forgotten theirs. 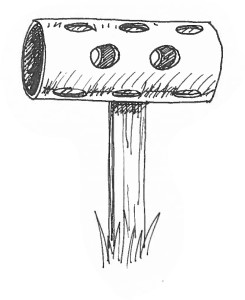 Make a DIY bag dispenser for your neighborhood. Neighbors can add bags and take one if they forget theirs. 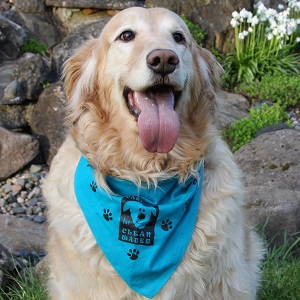 Add some fashion to your dog's life and help spread the message about Canines for Clean Water with this bandana (dog not included).

What's behind this campaign?

In 2020, the cities of Battle Ground, Camas and Washougal joined Clark County to promote a refreshed campaign that specifically addresses pet waste left along trails, which are often located alongside streams and lakes. Together, we brought Canines for Clean Water to Stormwater Partners for a unified message and effort across Clark County (Vancouver and Ridgefield also participate).

What does pet waste have to do with clean water?

Polluted stormwater is the leading source of water pollution to our local streams and lakes. When rain hits the ground, it becomes stormwater. As stormwater flows across land, roads and sidewalks, it picks up pollutants that are left outside. Dog poop left outside contaminates stormwater as it flows towards storm drains that take it to the nearest stream, untreated.

How do we know dog poop is polluting our local streams?

Clark County is required to monitor stream health and water quality under the NPDES permit. The Department of Ecology also monitors streams throughout Washington State. Bacteria is a known pollutant that can cause illness and harm stream health. Measuring of E.coli concentrations is a parameter used to monitor bacteria levels in our waterways. Unfortunately, a number of our local streams do not meet state standards for E. coli levels.

It has always been assumed from sophisticated tests and studies elsewhere that pet waste is a primary contributor of E. coli in our streams. There are more than 110,000 dogs in Clark County! New testing technologies have allowed our scientists to match the DNA of the fecal coliform found in samples to different animals. In 2019, Clark County did these source microbial analysis tests throughout the Salmon Creek watershed where E. coli levels exceeded state standards. Every sample showed the presence of dog. Similar results also came from samples in the Whipple Creek and East Fork Lewis River watersheds.